Commercial Progression presents Hooked on Drupal, “Episode 12: Drupal 8 is here, let’s #celebr8d8!". With the official Drupal 8 release date set for November 19th, the CP development crew assembles for an in-depth conversation on all things Drupal 8. We predicted the release date of Drupal 8 to within 3 days on our February podcast.  This time, Hillary Lewandowski will be presenting an overview of Drupal 8 at our next meetup and Drupal 8 release party with Girl Develop It Detroit at Grand Circus. Approaches for migrating Drupal 6 and 7 sites to Drupal 8 are discussed. Changes in the development cycle for Drupal 8 going forward are mused upon. What does it mean that Drupal 8 is built on Symfony and how will the respective development communities merge, we talk it through.

The wait is over, Drupal 8 is here, let's #celebr8d8! Conveniently we had a Drupal meetup scheduled for the same night as the release of Drupal 8 (Thursday November 19th, 2015), so this meetup has just been upgraded to the…

Grand Circus has been a gracious host of The Michigan Drupal User Group in 2015.  This has allowed us to meet some of the  members of the Girl Develop It Detroit community and has given rise to this opportunity for co-hosting a demo / training night for all things Drupal.

We know there is a strong development community in Detroit, and we believe this is the season for curiosity in Drupal to bloom.  The full version of Drupal 8 will be released on Nov. 19th.  Now is the time to check it out, and this is the Meetup for you to do it!

If you have a Drupal 7 website and you are thinking about upgrading to Drupal 8, how do you decide and what should you consider?  We discuss the out of the box User Experience advantages of the Drupal 8 platform with in line editing features as well as some of the object oriented programming advancements of Drupal 8 on Symfony.

Stay tuned for the future release of 50 training videos from OSTraining specifically addressing the upgrade and migration path to Drupal 8 from previous versions of Drupal.

If you are starting a new Drupal web development project, should your default choice be Drupal 8?  Are there some scenarios in which Drupal 7 is still a good candidate for web design and development? Drupal 7 is a mature development platform with long term support secured up to the release of Drupal 9.  This gives Drupal 7 developers and website owners several years of fully supported Drupal 7 development.

Every new Drupal web development project will want to seriously look at Drupal 8 and consider if there is a good reason why they should not take on the project with the latest version of Drupal. The Drupal development community will be very much focused on Drupal 8 and that is where all of the best energy and talent will be working. Going forward, new features and web integration projects will begin with Drupal 8 in mind.

Drupal 8 is Built on Symfony

Our development team has been training up on the Symfony web development framework over the last few years. Dan Reinders has attended several in-person training classes with the folks at KNP Labs, not to mention their online offerings at KNP University. In this podcast, Hillary describes how the move to Symfony shapes the Object Oriented programming future for Drupal 8. Complex website will be able to experience gradual development progress via deprecated function migrations within a predictable software release cycle. This means there will be far fewer hurdles to jump as projects upgrade to new versions of Drupal in the future. This move to Symfony also opens up Drupal development to include a global community of experienced Object Oriented programmers. 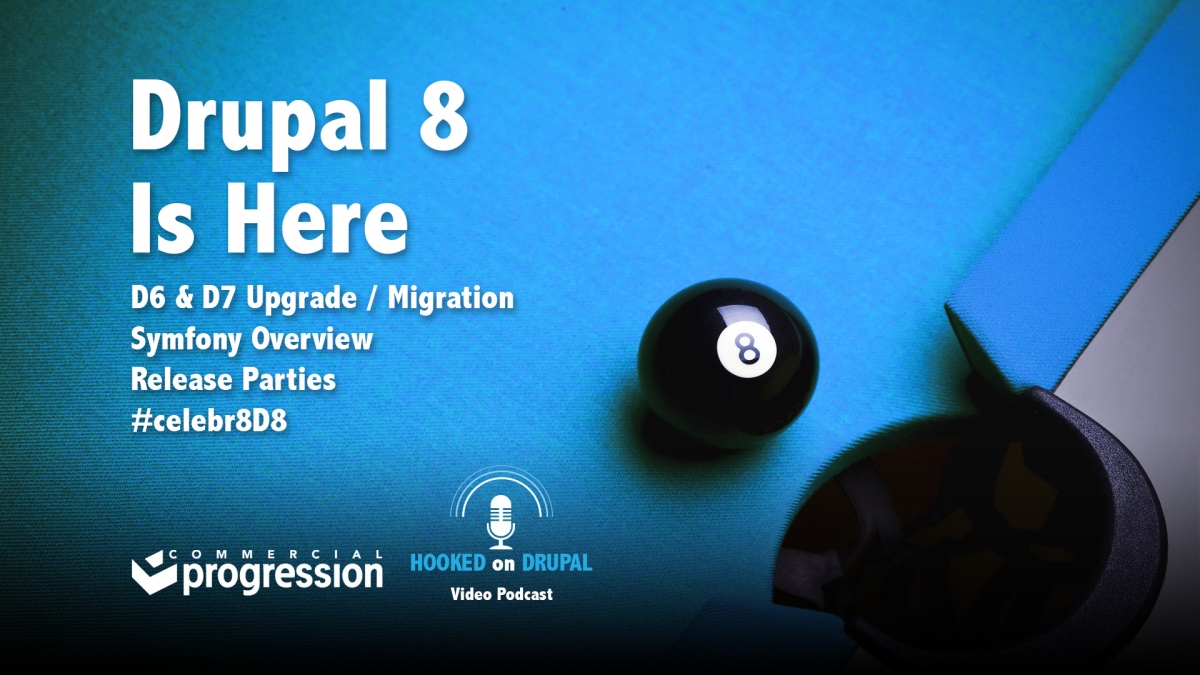